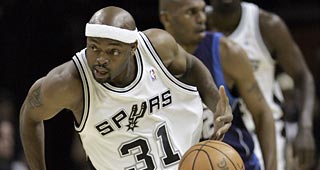 According to the San Antonio Express-News, Spur guard Nick Van Exel's ejection by ref Steve Javie is not the first time the two have crossed paths.

Playing for the Denver Nuggets back in 2001, Van Exel claimed that Javie called him a "miserable person" during a game in Milwaukee. He also claimed Javie cursed at him, using an expression unprintable in a family newspaper.

After the incident in Milwaukee, Van Exel told the Denver Post that Javie "has been on me since I came into the league, basically."

"(Javie) has a grudge," Van Exel said then. "It's not fair that you pretty much know that before the game starts.

Van Exel was dressed and gone from the Spurs' locker room by the time the media was allowed inside.