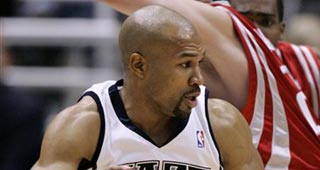 Derek Fisher has been elected as the new president of the NBA Players Association.

Fisher, who was Vice President, succeeds Antonio Davis as the players' chief liaison with the league, assuming Davis, who is not currently on an NBA roster, is retired.

The current CBA runs through 2011, so it is likely that his presidency will be very quiet and uneventful.