King: We Had A T-Mac For Hughes Trade With Toronto 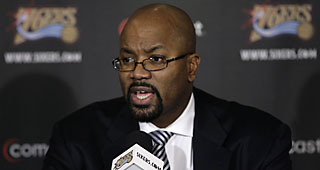 Billy King, who is now an analyst for ESPN, revealed a trade he had agreed upon with the Raptors when he was GM of the Sixers.

The Sixers would have sent Larry Hughes to Toronto for Tracy McGrady and a first round pick.

Stephen A. Smith broke the trade and the Raptors ended up getting cold feet and the deal fell through.