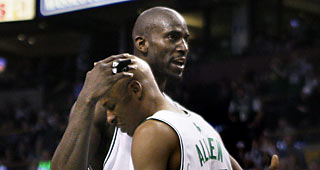 The NBA announced the reserves of the 2011 All-Star Game on Thursday.

Boston's Kevin Garnett, Rajon Rondo, Paul Pierce and Ray Allen were named to the team, along with Chris Bosh of Miami and Atlanta's Al Horford and Joe Johnson.

Kevin Love and LaMarcus Aldridge were amongst the most prominent snubs.

• Click here for view RealGM's new All-Star pages. We now have historical All-Star data by team, box scores for past All-Star Games and Rookie Challenges, whether players were selected by the fans, coaches or the commissioner and much more.