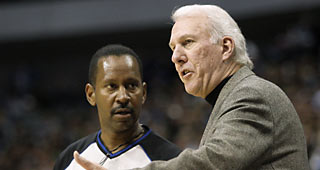 Gregg Popovich called the Lakers the best team in the West in a news conference on Thursday, not his Spurs.

"I think they are the best team in the West," Popovich said. "I think the struggles are overblown by you guys and gals. They are who they are. They've been doing this a long time. They just won two [championships] in a row again and there's no doubt perhaps there's going to be some nights when it's just not all there emotionally. We run into that now, we've got the best record and we run into that and we haven't won a championship in a long time so we don't have that excuse and it happens to us."

The Spurs went on to beat the Lakers 89-88 in dramatic fashion on Thursday night.

"I think they're the best, I really do," Popovich said. "They're put together the way they need to be put together. They got the experience. They know what they're doing. [Lakers coach] Phil [Jackson is] going to be patient with them and do what he does and they'll be there come playoff time."