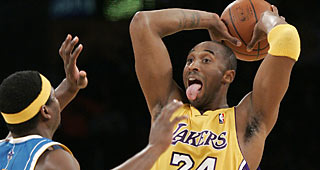 Kobe Bryant defended Kevin Garnett prior to Thursday's game against the Celtics. The forward's sportsmanship has been called into question this season after an off-color remark he made about cancer to Detroit's Charlie Villanueva and a below-the-belt hit he had on Phoenix's Channing Frye.

Bryant and Garnett played together on nine All-Star games when KG was a member of the Timberwolves.

"He's a Celtic," Bryant said with a smile. "That's what Celtics do."

And what about the Lakers?

"We're the good guys," he replied.

Bryant enjoys the chirping that goes on when the two teams meet.

"Trash talking is fine," Bryant said. "I love to talk. Paul [Pierce] likes to talk, KG likes to talk. I'm probably the only one on my team that likes to talk so I'll probably be jawing with all of them [Thursday night] ... It's fun."