Knicks Include Gallinari In Latest Offer For Carmelo 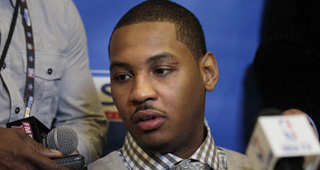 The Knicks have improved their offer to Denver for Carmelo Anthony.

The offer has been confirmed by Alan Hahn of Newsday, who added a source said "we kind of passed (our limit)".

The first-round pick has long been rumored to be coming from Minnesota, who would acquire Anthony Randolph.

Hahn reports that a third team is likely needed to get a deal finished because of Denver's need for luxury tax relief.

The Knicks are giving Denver a choice between Gallinari and Landry Fields and Denver prefers the former. New York is confident that its offer could get a trade finalized for Anthony soon.

Denver is hoping for a resolution to the situation by Sunday.