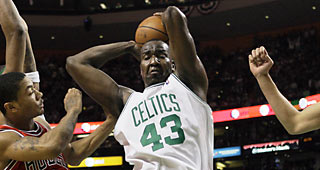 The Oklahoma City Thunder have signed center Kendrick Perkins to a multi-year contract extension, it was announced today by Executive Vice President and General Manager Sam Presti. Per team policy, the terms of the agreement were not disclosed, but Yahoo! Sports reports that it will pay Perkins $34.8 million over four years.

“We had a unique opportunity to enter into discussions with Kendrick to solidify his future with our organization,” said Presti. “We are pleased to know that he will be a part of our core group now and in the future. Kendrick’s blue-collar, team-first approach aligns with the vision we hold for building a sustainable team in the Oklahoma City community.”