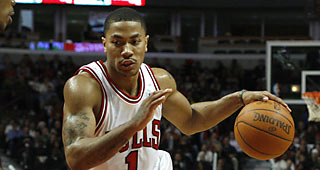 Derrick Rose took a low-key approach to recruiting LeBron James this past summer.

James, who eventually signed with the Heat as a free agent, was being courted by the Bulls, among other teams.

Chicago went on to sign a number of other free agents and they currently trail Miami by just a game for the second seed in the Eastern Conference.