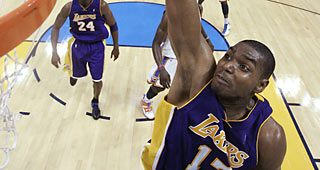 Andrew Bynum has improved his defense dramatically this season, whereas his game was largely dedicated to scoring in past seasons.

Bynum approached Phil Jackson after a film session a few weeks ago, which triggered the change.

"He felt he was inactive and he wasn't active enough and he needed to be more active on the defensive end," Jackson said before the Lakers practiced in Atlanta on Monday. "We didn't talk about the offense at all. I told him the difference between us being a good club and a great club is his presence on the floor defensively and rebounding. Andrew's a smart kid, he understands that."

Lakers assistant coach Chuck Person convinced Jackson on changing the team defense this season to keep Bynum in the lane on the defensive end, rather than amble out to the perimeter to help out guards contending with pick-and-rolls.

"He's a plug," Jackson said. "He's in there stopping penetration."

"The more active he is, the better we are," said Bryant. "We have a natural shot blocker, that's what he does. He has great timing and he moves his feet well and that's a big key for our team."