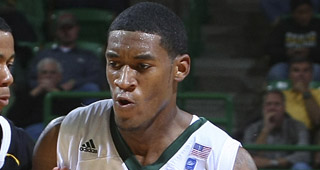 Baylor freshman forward Perry Jones III has been declared ineligible for a pre-enrollment amateurism violation/preferential treatment, school officials announced before the Bears were to take the floor to face Oklahoma in the opening round of the 2011 Phillips 66 Big 12 Championship. This is not considered to be an institutional violation of NCAA rules.

Baylor University was informed of the NCAA's decision on Jones III on Wednesday afternoon and immediately appealed to have his eligibility reinstated.

"We are profoundly disappointed in the timing and determination in this matter," said Baylor Director of Athletics Ian McCaw. "This outcome appears to be inconsistent with other recent, widely discussed NCAA decisions."

Jones III had no knowledge of three, 15-day loans between his mother and AAU coach that were provided while Jones III was in high school. The loans were repaid in a timely manner, according to interviews conducted by Baylor officials and the NCAA staff. Prior to his enrollment at Baylor, Jones' AAU coach also paid for Jones' travel to a professional pre-season football game in San Diego, Calif.

McCaw indicated that Baylor has been cooperative and transparent in working with the NCAA through this process, and that no Baylor representatives were involved or aware of any preferential treatment between the AAU coach and Jones' family, whose relationship dates to at least the sixth grade.

"Perry is to be commended for being cooperative and forthcoming during this unfortunate process," McCaw said

Jones III, a finalist for the 2011 Wayman Tisdale Award given to the nation's top freshman, earned second-team All-Big 12 honors and leads all Big 12 freshmen in both scoring (13.9 ppg) and field goal percentage (.549).