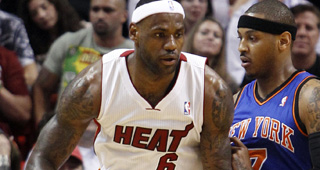 The Heat stumbled to a 9-8 start as LeBron James, Dwyane Wade and Chris Bosh began their acclimation process. They eventually turned it around in December and James can empathize with what Carmelo Anthony is experiencing during his first stretch of games with the Knicks.

New York is 7-9 since acquiring Anthony shortly before the deadline.

"I know exactly what he's going through right now," James said of his friend Anthony. "And it's going to take time. Everybody knows we were 9-8. We had to figure things out. And we're still figuring things out. Once they figure it out, it'll be fine."

The Knicks made their significant transaction during the middle of their season, while Miami had an entire summer to prepare.

Regardless, James sees New York's current issues as strikingly similar to the ones the Heat endured in November.

"People think that just because you put great talent together that it's automatically going to work from the start," James told ESPN.com, about the similarities between the Heat and Knicks. "But it doesn't work like that. It takes time for chemistry. It takes time for cohesiveness. It takes time for people to understand where you like the ball, where you want the ball. And it starts with building those relationships off the court."