Mo Williams: Derek Fisher Is The Hines Ward Of The NBA 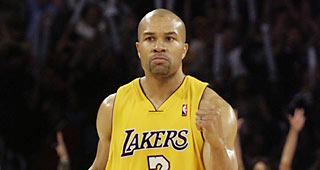 The Lakers defeated the Clippers by a 112-104 final on Friday night.

On Saturday, Williams delivered a Tweet about Derek Fisher in obvious reference to the confrontation at the end of the game.

"If yall didn't know, D Fish is the Hines Ward of the NBA," wrote Williams. "I don't know if that's a compliment or not. But don't let that nice guy fool u."

Chris Kaman was ejected in the final minute following a demonstrative argument with Fisher following a physical screen. Kaman made a gesture at Fisher to meet him in the parking lot after the game.

Fisher frequently uses his elbow when he is met with a screen on the perimeter.