Krstic Returns To Boston For MRI On Injured Knee 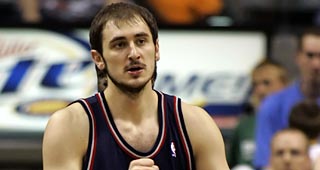 On the same night Jermaine O'Neal returned the court, the Boston Celtics lost Nenad Krstic for the foreseeable future with an injury to his right knee.

Krstic left with 2:18 left in the first half of Thursday's game after landing awkwardly on his right leg. His knee became bent out of shape and he immediately felt the pain. With the help of Celtics trainer Ed Lacerte, Krstic limped off the floor

Krstic will return home to Boston where he will undergo an MRI on Friday.