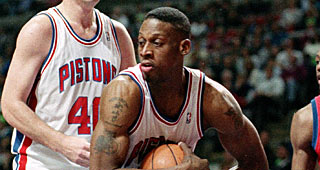 Former Detroit Pistons Dennis Rodman has been elected into the Basketball Hall of Fame, according to a person with knowledge of the situation.

The official announcement will be made Monday at the Final Four in Houston.

Rodman won five NBA championships -- two with the Pistons and three with Chicago.