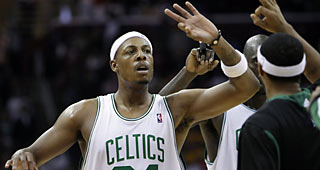 Paul Pierce, in an interview with WEEI in Boston, addressed the perception that the Celtics are stumbling into the playoffs without Kendrick Perkins.

"It was even worse last year when we went through our struggle," Pierce said. "Definitely Kendrick had his impact, but you’ve got to remember he missed a big portion of the season and, during that portion, we were able to beat a lot of the good teams also.

"I think that’s just an excuse at this point. I think that it’s time for us to move on from that. It hurts when you lose a teammate … but at the end of the day, the guys that are in this locker room are the guys you’ve got to go to war with."

Pierce said a healthy Shaquille O’Neal is capable of filling the void on both ends.

"He’s going to be huge for us," Pierce said. "If he’s healthy, I believe we can win the whole thing, but we definitely need him. He’s somebody that’s tough to match up with and he can cause all kinds of problems for the other team."