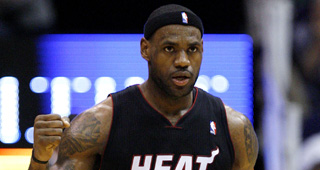 Boys & Girls Clubs in Cleveland, Akron and Elyria report receiving a total of more than $480,000, part of about $2 million that James has distributed nationwide since the July broadcast, billed as "The Decision."

In Cleveland, clubs in the Mount Pleasant and Slavic Village neighborhoods have received $130,000.

A contribution of nearly $60,000 repaired a leaky roof, refurbished a dingy gymnasium and will pay for a new playground at the Mount Pleasant club on East 131st Street. And the Slavic Village club on Broadway received $70,000, which was used to install a new gym floor and purchase bleachers. The club also is waiting on delivery of 20 new computers.

Both clubs also received a video sports training system and $2,500 worth of sports gear.

In addition to the $2 million cash contribution, James arranged for the donation of $500,000 in computers from Hewlett-Packard and $500,000 in gear from Nike. Fifty-nine Boys & Girls Clubs across the country are receiving help from James.