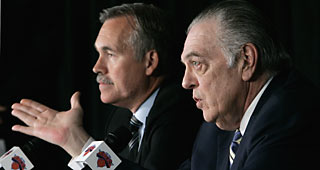 Donnie Walsh is conducting business as usual despite James Dolan not exercising the option year on the Knicks' president of basketball operation's contract Saturday.

In his first comments since the Knicks were swept in the first round by the Boston Celtics, Walsh said via a text message Monday, "I am getting ready for the draft and the offseason."

Walsh added that his current contract does not expire until June 30. That gives Walsh, the Knicks and the Garden's chairman two months to either negotiate a new contract or part ways. The clause in Walsh's contract called for organization to pick up his option by April 30, although that does not preclude Dolan from signing Walsh to an extension.

The general feeling is that Walsh will return, but there are several key issues that need to be resolved, including the power to hire a successor. Dolan refused to allow Walsh to sign Chris Mullin as a general manager last summer. Instead, Dolan advised him to name Isiah Thomas GM but backed off when Walsh threatened to resign.