Garnett: Celtics 'All In' For Game 3 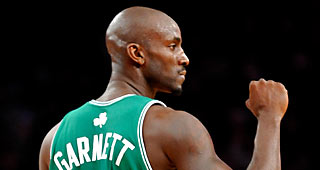 The Celtics have never been down 2-0 in a playoff series in the Kevin Garnett era, and they are well aware of the situation.

“The urgency is there,” Garnett said on Friday before the team took the practice floor. “This is it. We’ve used all of our lifelines. This is it. I hate to say it like that, but it’s true. There’s not a: Cool, keep your composure. Nah, this is: You’ve got to get the next game.”

He continued, “We’re taking their best shot. I still don’t think we’ve played our best basketball, and we’ve got to do that. We can’t just come out here and talk about it. We’re not on the white sands of the beach [any] more. We’re back in the jungle. Hopefully that’ll do some good for us. We’ll figure it out. I told you man, we’re all in. I’ve got two pocket kings and I’m all in. Let’s do it.”