Kidd: Lockout Shortened Season 'Would Be To My Advantage' 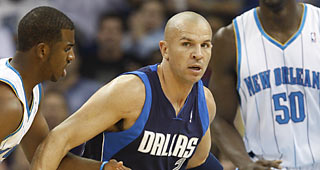 There has been some talk among older players around the NBA that an extended lockout could nudge them into early retirement. But for 38-year-old Jason Kidd, coming off a championship with the Mavericks, a lockout doesn’t sound like such a bad idea.

Kidd played 101 games this year, playoffs included, and became the oldest guard to start in an NBA Finals. The 101 games represent the second-most of his career. Asked how he might react to a lockout, Kidd gave no indication he would retire.

“For me, it’s hard to say,” Kidd said. “I just got done playing, so I have a short summer. I have been through a lockout twice. One was short, but the second one cut the season to 50 games. And as I get older, playing only 50 games, hopefully that would be to my advantage.”