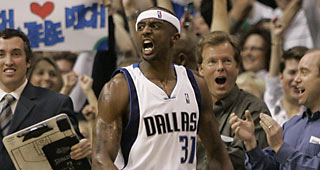 During the playoffs Jason Kidd, Dirk Nowitzki, Jason Terry, Shawn Marion, Tyson Chandler and Brian Cardinal made regular visits to a Texas wellness facility to take part in whole body cryotherapy, standing in a silo that dropped to as low as minus-320 degrees Fahrenheit.

"It's not going to make you fly out of the room or jump like LeBron James," says Terry, "but the feeling you get when you step out of that machine is unbelievable. You feel completely rejuvenated."

"I can't take it quite as cold as some of the others," said Kidd, who split time defending James and Dwyane Wade during the Finals. "But it still worked."

"It gave us a tremendous edge, not only physically but psychologically," Terry says. "I don't know if it was a team-bonding thing, but it's something that came up every day. We'd plan on getting together and hitting it. It became a ritual."