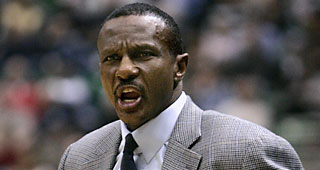 “The misnomer that you are in Canada and not in the States is totally misplaced,’’ new coach Dwane Casey. “Because it’s a great sports city. I can’t imagine if you turn the program around how exciting it would be. It’s a melting pot for anybody. But a lot of times players just come there in the dead of winter and don’t really get a taste of the city. That’s one thing that’s going to be our mission, is to try to change that image and go back to my recruiting days at Kentucky, and try to recruit.’’