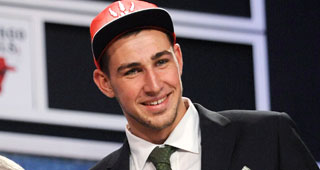 Darius Maskoliunas was Jonas Valanciunas' head coach at Lietuvos Rytas last season and recently shared some of his thoughts on Toronto's first round pick from the 2011 NBA Draft.

“He works hard in practice and never talks back,” Maskoliunas said. “He’s 100 percent concentrated. It was a pleasure to work with him."

Valanciunas is unlikely to play for the Raptors before the 12-13 NBA season.

“I see him as a Chris Bosh type,” Maskoliunas said. “He can play back to the basket, facing the basket… He has to take that mid-range shot. He can shoot it. But he can run, he can rebound, he even has a three-point shot."