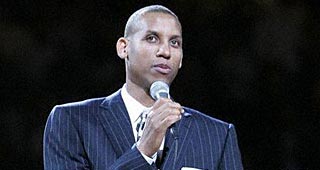 While Reggie Miller remains a fan favorite with the Pacers, his presence around the team has been a rarity since retiring in May of 2005.

Miller hasn’t been seen much around Conseco Fieldhouse since he retired, according to sources.

"I’ve only seen Miller at the fieldhouse three times since he walked off the court in May 2005," writes Mike Wells. "Once for a TNT game, his jersey retirement and during his documentary premiere."