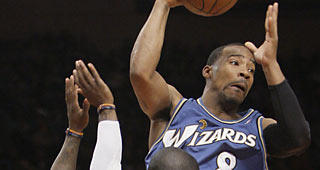 Javaris Crittenton has been charged with murder after a woman was shot on an Atlanta street. Jullian Jones was shot and killed on August 19th.

Police spokesman Carlos Campos said a murder warrant for the arrest of Crittenton had been issued and that he was not in custody. Crittenton is believed to be in Los Angeles and the FIB is involved in the investigation.

Jones was walking with a group of people on the southwest side of Atlanta when a SUV drove by and shot her, according to police.

Campos said the motive appears to be retaliation for a robbery in April, in which Crittenton was a victim.

Crittenton was involved in a gun altercation with Gilbert Arenas in December of 2009.

Crittenton pleaded guilty to a misdemeanor gun charge on Jan. 25, 2010 and received probation. He wasn't re-signed by the Wizards.

The Charlotte Bobcats signed Crittenton to a non-guaranteed contract before last season but he was waived Oct. 15.