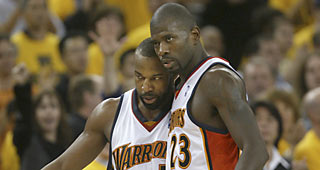 The 2007 "We Believe" Warriors will take on the current Warriors in an exhibition game to be played October 29 at the San Jose State Event Center.

Stephen Curry highlights the confirmations from the current Warriors roster. Dorell Wright, Jeremy Lin, Charlie Bell and rookie Jeremy Tyler are also confirmed to play for the 2011-12 Warriors, and Monta Ellis and David Lee are being recruited.

"It's the first chance to see the rookies and a chance to see the 'We Believe' team reunited," said Rasheed Malek, whose firm, AVE-HM Media, is handling the promotion of the game. "And it's the only basketball around here for months."