Howard Not Sure What Else He Can Do In Orlando 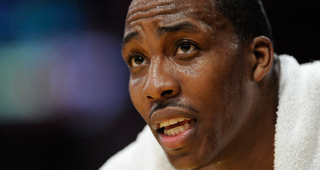 Dwight Howard was asked about his free agent future in an interview with Esquire's Scott Raab.

“I just don’t know what else I can do (in Orlando),” said Howard.

Asked by Raab if he sees himself in a much larger market, Howard said, “There’s more you can do in a bigger place. I’m stuck in a tough position because I feel like right now, where I’m at, I’ve done so much.

“And I just don’t know what else I can do. I can’t live for everybody else. I don’t know what decision I’m gonna make as of right now. It’s been crazy. Everybody wants me to come here, come play here, come to our team, do this. It’s a great feeling, though, to be wanted.”

Howard responds, “The toughest part for me is the city — the people. They’ve got burgers named after me in Orlando, they’ve got a Web site saying, “Please stay.” I love the people in the city. I’ve literally sat on the bench with a towel on my head crying, because I feel the passion in the stands. I just think about what’s going to be best for what I want to accomplish in my life. And I don’t want that door to close on me, wherever that door is. I don’t want it to close.”