Meeting Ends Without Deal, Talks To Resume At Noon On Thursday 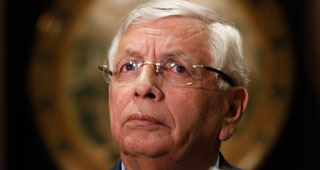 The NBA and NBPA met for 12 hours on Wednesday, beginning at 1:00 PM EST and concluding at 1:00 AM EST early on Thursday morning.

David Stern said that the two sides have agreed to stop the clock on their ultimatum offer and continue negotiations on Thursday at noon.

"Nothing was worked out today," said Stern.

Stern advised the media not to read much into the situation both for optimism or pessimism.

Fisher said he "hopes to be able to finish this out" on Thursday.

"Obviously, we'd have a deal done if the right flexibility was being shown," added Fisher.

According to Billy Hunter, talks can continue for several more days.