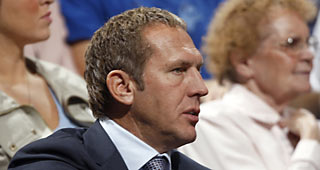 Bryan Colangelo spoke on Tuesday about how he is attempting to rebuild the Raptors.

Colangelo gambled by picking Jonas Valanciunas, who was not going to come to the NBA for the 11-12 season.

“The pick that we made in the last draft should turn out to be a very valuable pick for this franchise,” Colangelo said of the six-foot-11 Valanciunas. “We’re looking at adding potentially another quality, solid player, in what’s known as a very deep draft (next year). Regardless of where we end up this year, we’re going to get some talent.

“Last year, if we chose the player everyone wanted us to, we wouldn’t have taken a young European player in the draft, who’s likely the best young centre prospect to come to the NBA in years,” Colangelo said. “Instead, we made a selection that caused a little bit of angst in the room, and a thousand people (were) booing rather than cheering and getting excited about something.

“But you have to act in the best interest of the organization, both short and long term, at all times.”

“It became clear that in order for us to take the biggest step forward, we were going to have to knock some things down (and) rebuild,” he said, “and we’re knee-deep in that process right now. Depending on what we do this year, and how things play out over the next 12 months, we may have as much as $24 million in (salary) cap flexibility.

“It’s not just targeting free agents, but you can use (cap) space to obtain players without worrying about a traded-player exception.”