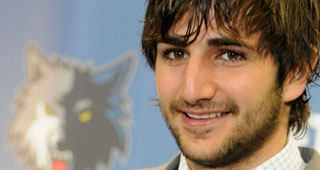 Ricky Rubio will consider returning to his former team in Barcelona if the NBA season is canceled due to its continued lockout.

Rubio told Catalan radio ONA FM that "I want to wait until I see there is no chance of resolving the situation, and then I will sign with another team."

Rubio also said he would contact Barcelona to see if he can practice with the team as Pau Gasol and Marc Gasol have been doing.

Rubio said "it would be nice to practice and play with the Gasols on Barca."