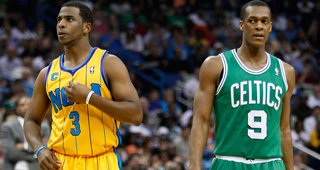 The Celtics have been discussing trading Rajon Rondo for Chris Paul, according to sources. But the Hornets don't appear interested in a two-team deal.

Danny Ainge has been searching for a third team that would give the Hornets young pieces that would help Dell Demps in his rebuilding plan.

It is also unclear whether Paul would agree to an extension, something Ainge would need to execute a trade.