Hornets Most Interested In Curry, Gordon In Exchange Of Paul 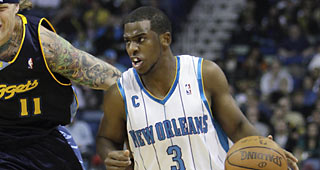 Stephen Curry and Eric Gordon are the two players New Orleans has pursued the hardest in the the team's fast-moving search for a workable Chris Paul trade, according to sources close to the talks.

But the Hornets continue to meet with resistance from the Warriors and the Clippers on Curry and Gordon, because both teams are reluctant to part with their young backcourt cornerstones with no assurance from Paul that he will stay beyond this season.

Sources said that the Hornets have actually been trying to convince the Warriors to part with Curry since before last season's trade deadline in February.