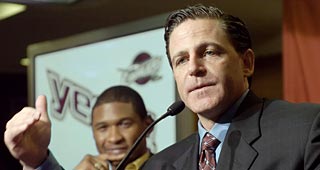 Dan Gilbert sent an email to David Stern, Adam Silver and several of his fellow owners to urge the NBA to block a proposed trade that would send Chris Paul to the Lakers.

The following is the email in its entirety:

It would be a travesty to allow the Lakers to acquire Chris Paul in the apparent trade being discussed.

This trade should go to a vote of the 29 owners of the Hornets.

I cannot remember ever seeing a trade where a team got by far the best player in the trade and saved over $40 million in the process. And it doesn’t appear that they would give up any draft picks, which might allow to later make a trade for Dwight Howard. (They would also get a large trade exception that would help them improve their team and/or eventually trade for Howard.) When the Lakers got Pau (at the time considered an extremely lopsided trade) they took on tens of millions in additional salary and luxury tax and they gave up a number of prospects (one in Marc Gasol who may become a max-salary player).

I just don’t see how we can allow this trade to happen.

I know the vast majority of owners feel the same way that I do.

When will we just change the name of 25 of the 30 teams to the Washington Generals?