David West To Celtics In Sign-And-Trade 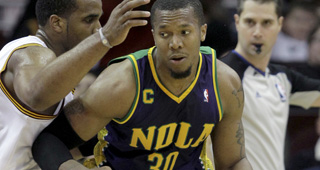 David West is close to a three-year sign-and-trade deal just under $30 million with the Celtics.

Boston will send Jermaine O'Neal and another player in exchange for West. O'Neal will presumably be flipped by the Hornets to another team.

While West found the market less robust than he was expecting, he will take less money to play for a contender.