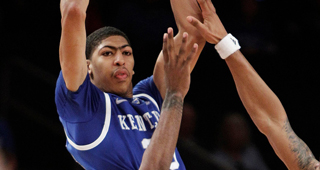 Davis is on pace to tie or break the Kentucky single-season record of blocks (83) in a season by the end of this week, which would not even be the halfway point of the season.

If Davis keeps his current pace and Kentucky plays 38 games (as it has the last two years), Davis would shatter the single-season record, finishing with 176 swats, which would be 93 more than the current record.