Howard Open To Signing With Celtics 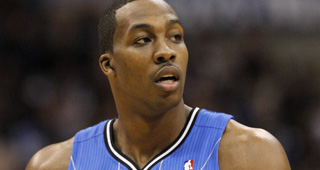 “Always. Always,” Howard said. “I’d always listen to a team like that.”

Howard said his primary goal is to win a championship.

“My thing is I want to win,” Howard said. “It’s not something like I’m doing this for money. I win. I want to do it my way.

“The first thing is basketball. I want to win a championship, and it takes a certain type of team to win a championship. You know, there’s a lot of teams who are great during the regular season. They play well, but it’s different once you play in those playoffs, you know? It’s gut-check time.

“Like I told the Magic, I just want to win. I don’t want a team that doesn’t know how you have to win in the playoffs. I want a team that’s going to go out every night and forget about stats, forget about who scores the most points or who is the fan favorite. Just go out and play, play for each other and play to win. That’s the only thing.”