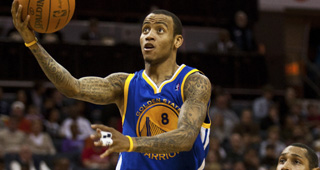 The Magic, Warriors and Hornets are in discussions on a three-team trade, two league sources confirmed.

Monta Ellis, Andris Biedrins and Dorell Wright would be sent by the Warriors to the Magic.

The Hornets' exact involvement is unclear, but believed to be centered around Chris Kaman.

No trade is imminent but talks are ongoing say sources.