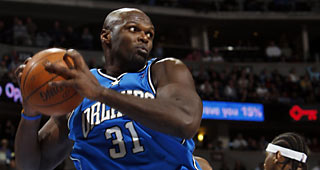 The Orlando Magic are expected to make several significant changes this offseason and Adonal Foyle could be at the center of their first major move.

Foyle was named Director of Player Development with the Magic in September of 2010.

The Magic interviewed Foyle for the General Manager position prior to the March 15th trade deadline, according to sources.

Otis Smith’s future with the team is unknown at this point, but it’s believed that Foyle is the favorite to take Smith’s place should the team make a change.

Sources say Magic CEO Alex Martins was impressed with Foyle and heavily relied on him to help with the understanding of the basketball operations side of the business. Foyle is also being courted by other teams, specifically the Charlotte Bobcats and the Magic don’t want to lose him, sources said.

The Magic have involved Foyle in many of the team’s personnel decisions this season.

Prior to the trade deadline the Magic formed a traveling war room as they searched for potential deals to appease Dwight Howard. Foyle was said to be instrumental in all discussions and was viewed as Martins’ “right hand man.” He is said to have been the “point man” in the trade discussions with the New Jersey Nets. He even made a trip to the New Jersey to meet with Billy King, according to sources.

Foyle's emergence came around the same time the rumors of Smith’s loss of decision-making power surfaced. Sources said that Martins stripped Smith of all decision-making power and, along with Foyle, took control of all trade talks, which is believed to have been the primary reason the team failed in their pursuit of Monta Ellis.

After Howard decided to opt-in, Foyle was told he would be involved in all future personnel decisions.

When asked about the initial interview Foyle denied it. He did, however, acknowledge that there has been interest from other teams, but didn’t specify what role his suitors would move him to.

Martins was non-committal about Smith’s future Wednesday at the Amway Center. He would only say that every position, including his, will be “evaluated.”