Steve Nash To Lakers In Sign-And-Trade 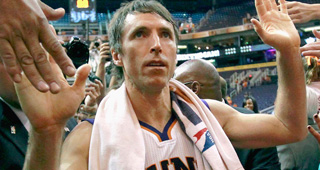 The Lakers have agreed to acquire Steve Nash from the Suns in a sign-and-trade.

Nash will receive a three-year, $25 million deal as he can be absorbed using the trade exception created by trading Lamar Odom to the Mavericks. The Suns will receive two future first round picks (2013, 2015) and two second rounders (2013, 2014) after eventually relenting to trade Nash within the Pacific Division.

Marc J. Spears of Yahoo! reports that Nash was deciding between the Knicks and Raptors until the Lakers became a legitimate option two days ago.