Dwight Howard Reiterates Desire For Trade During Meeting With Hennigan 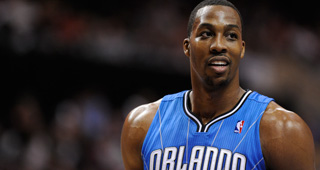 Hennigan traveled to Los Angeles to have a face-to-face discussion with Howard with the hopes of persuading him to back off his trade request and allow the organization more time to build a championship contender. Hennigan, however, was unsuccessful in his pitch as Howard reiterated his desire to leave Orlando as soon as possible, according to sources.

Hennigan’s pitch to Howard had a heavy focus on the two men developing a relationship that would be valuable to the Magic moving forward. He expressed a sincere interest in getting to know the six-time All-Star and working with him to improve the team. Howard, however, was expecting an outline of how the team planned to improve and get back to a championship-contending level, something he didn’t receive during the hour-long meeting, according to sources.

Howard was staunch in his stance and again made it clear to Hennigan that he has no desire to return to Orlando. He told the 30-year-old general manager that he would “never sign another contract with the Magic,” according to sources that spoke with RealGM.

During the meeting, Howard informed Hennigan that he would be willing to re-sign with the Lakers at the end of the 12-13 season if the two teams were able to complete a trade.

The scenarios Howard was open to during the meeting were: An immediate trade to the Lakers, a January trade to the Brooklyn Nets or a clean break at the end of the 2012-13 season. But he was clear that he would not return to the Magic, choosing to leave as a free agent after the season, sources told RealGM.

Hennigan informed Howard that he didn’t have any deals in the works and wasn’t quite sure how to respond to what he was told, according to sources. Hennigan was noncommittal on any of the discussed scenarios as the meeting ended.

Hennigan’s noncommittal approach has only frustrated Howard more as it’s believed that several acceptable offers have been presented to the Magic only to be turned down due to a lack of a true intent to trade him, sources said.

There is now a belief that Hennigan and the Magic have half-heartedly entered into trade talks, resulting in frustration among the many teams rumored to have been included in the ongoing negotiations.

Trading Howard, however, is a process the Magic won’t rush as they understand his value on and off the court and aren’t willing, at this point, to lose him without acceptable compensation.