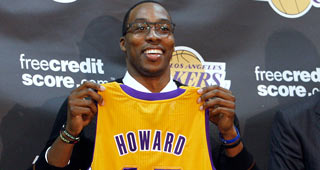 Orlando has acquired Aaron Afflalo and Al Harrington from Denver, Maurice Harkless and Nikola Vucevic from Philadelphia, as well as Josh McRoberts and Christian Eyenga from the Los Angeles Lakers.

“A primary goal for our basketball team is to achieve sustainability while maintaining a long-term vision. We feel this deal puts us in a position to begin building in that direction,” said Magic GM Rob Hennigan. “In addition to the six players joining our team, we will be in a position to maximize our salary cap flexibility in the near future, as well as utilize the multiple draft picks we have acquired going forward.”

“Dwight Howard accomplished tremendous success on and off the court during his eight years in Orlando,” said Hennigan. “We wish him, Chris (Duhon), Earl (Clark) and Jason (Richardson) all the best in the future.”

“We’d like to thank Andrew for all he’s done for the team and the organization,” said Lakers GM Mitch Kupchak. “Andrew has been with us since we drafted him at seventeen years old and over the last seven years we have watched him develop into an All-Star player who has helped the team win two NBA Championships. He’s a special talent with a bright future. We appreciate all of his contributions and wish him well for the remainder of his career.”

“It’s not often you get the opportunity to improve your team by adding an All-Star player like Andre Iguodala,” said Nuggets GM Masai Ujiri said. “He’s an Olympian, a great defender and a great all-around player. We think he fits in really well with the type of system coach George Karl runs and the team we have here in Denver.”

"I’m excited to be heading to Denver,” Iguodala said. “I have a great relationship with (team president) Josh Kroenke, and I really respect what he and Masai have built with the Nuggets. They’re a great young team with an excellent coaching staff, led by Coach Karl. I also feel like I will really complement their system and roster, both offensively and defensively."

"We are very excited to welcome Andrew Bynum, one of the league's best, young centers, and Jason Richardson, a proven, respected veteran, to the Philadelphia 76ers," said Managing Owner Josh Harris. "As we stated from the outset, our ownership group is committed to exploring every option available to us in order to improve our team. This trade is the culmination of a very active off-season, one that we believe positions the Sixers for success this season and for many years to come."