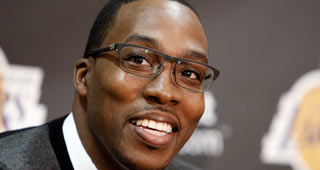 Mitch Kupchak seemed optimistic that Dwight Howard will want to stay long-term once the eight-year center gets a taste of life as a Laker.

“Our feeling all along has been to just get him here and we're comfortable that after being in Los Angeles for a year, hopefully winning a lot of games, contending for a championship, being exposed to our fan base -- which, quite frankly, goes way beyond Southern California,” Kupchak said. “We go into New York or Charlotte or Utah or Phoenix, and there are always two or three thousand fans there wearing Lakers gear.

“I just think that he'll feel that this is a special place, that the lifestyle will suit him. It's a big enough town where you can't be the sole celebrity, but there are so many Lakers fans here that you don't lose your celebrity. You can still feel special in a city this big. That's our approach, and a year from now we'll see where we stand.”

Howard will be an unrestricted free agent at the end of the 2012-13 season.