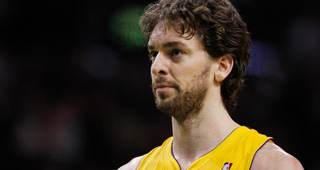 The Los Angeles Lakers believe their new offense will enhance the versatility of Pau Gasol.

"He's too good for me to be specific with him," Mike Brown said. "He just does so much that I don't want to put a ceiling on him."

"It's a matter of the system versus having a traditional pro set," Bryant said. "Last year, we made calls. We had to make calls. We ran down. Run a play for me. Run a play for Andrew. Run a play for Pau. It was tough to try to find that balance. In this type of system, you have ball movement and defense. That determines where the ball is going. You try to get the easiest shot possible. It enables us to be decision makers and play to our strengths."

Gasol's background in the triangle should allow him to excel in the Princeton offense.

"It will be a matter of being aggressive," Gasol said. "The offense is about reads and movement. If you're aggressive and make yourself available, you're going to have options.

"It's going to be a lot of looks with the movement and the quality of the players that will be out there," Gasol said. "That attracts a lot of attention. We'll have opportunities regardless, no matter what .... No player is worried about that, even though we have players who have the ability to score easily."