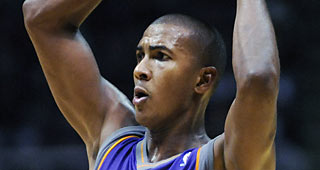 After months of negotiations, Raja Bell and the Utah Jazz have moved past contract buyout talks and are now weighing trade scenarios, agent Herb Rudoy told RealGM on Tuesday afternoon.

While RealGM reported last month that both sides had resumed buyout discussions with the expectation of reaching agreement, none of those conversations are taking place at this stage.

Bell has been on the roster of the Jazz throughout training camp and preseason, but the organization asked him not to show up.

The Miami Heat and Los Angeles Lakers have long been viable destinations for Bell, who has wanted a chance of scenery. Bell, 36, is still capable of helping a contender and remains a strong outside shooter and a hard-nosed defender.

Bell has averaged nearly 10 points on 40.6 percent from three-point range over his 12 NBA seasons with six different teams. He averaged 6.4 points while playing 34 of 66 games a season ago.