Kevin Martin Loves Being With Thunder, Expects Free Agency To Be Interesting 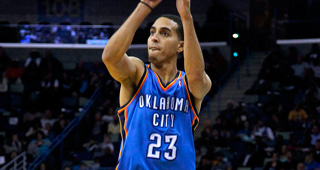 Kevin Martin and his agent have not discussed a contract extension with Oklahoma City Thunder management.

“We’re not talking about that right now, we’re just living in the moment," Martin told RealGM before the Thunder played the Nets in Brooklyn on Tuesday. "That’s all this is about. They brought me here to be a great fit for these guys and everything’s been positive thus far, so we want to keep that ball rolling.”

Despite the lack of negotiations, Martin made it clear that returning to the Thunder is a strong possibility.

“I love it,” said Martin. “I’m a Midwest guy and it’s going to be an interesting summer for myself, because I never got a chance to really be a free agent and I’m going to be high in the shooting guard class, so hopefully everything works out here. We have a great thing right now and I’m just living in the moment.”