Phil Jackson Has No Interest In Nets Job 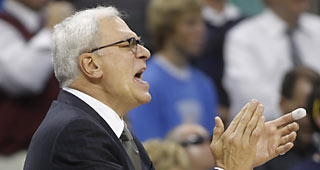 Phil Jackson has no interest in coaching the Brooklyn Nets.

"Phil has no interest in the Nets job at this time," Jackson's agent, Todd Musburger, said via text.

Jackson is reportedly interested in a management position similar to that of Pat Riley's in Miami, where he could shape the front office and roster.