Source: Gay Likely To Stay With Grizzlies This Season 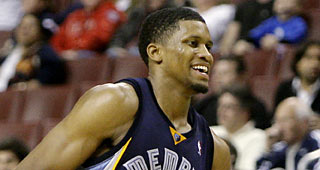 Although Memphis Grizzlies CEO Jason Levien recently declined to comment on persistent trade rumors surrounding the team, Rudy Gay is likely to stay with the organization through this season, according to a person with knowledge of those conversations.

The Grizzlies have entertained the Washington Wizards' offer for Gay. The crux of the Wizards' proposal would be the Grizzlies receiving rookie shooting guard Bradley Beal in a larger package.

The proposals for Zach Randolph -- who's also been in trade speculation -- have been even weaker.