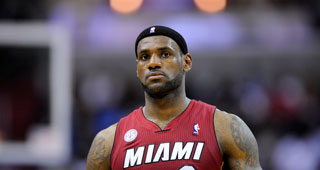 The Cleveland Cavaliers are positioning themselves to be able to sign a maximum contract player during the offseason of 2014, according to executives and agents around the NBA.

LeBron James is eligible to become an unrestricted free agent in that offseason.

People around the NBA believe there is an increasing possibility of James returning to the Cavaliers after the 13-14 season.

James signed with the Miami Heat in the 2010 offseason to improve his odds of winning a title, but the Cavaliers have managed to acquire several promising young players as part of their rebuilding.