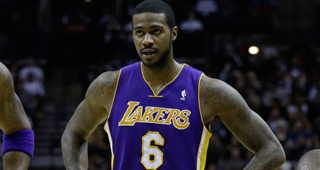 Earl Clark has played an integral role for the Los Angeles Lakers since becoming the starter last month, and he knows that his value has increased ahead of unrestricted free agency this upcoming offseason.

"Obviously, not playing earlier and averaging those [low] numbers, I didn't know where I would end up," Clark said. "Playing good now and with other teams wanting you, you can pick your own destiny. It feels good to be in the driver's seat."

Still, Clark made it clear that he hopes to re-sign with the Lakers.

"This is my first team that gave me an opportunity. I love the guys here," Clark said. "The organization and the style of play fits me. I really want to stay here."

Clark, 25, is making just $1.2 million this season. He has averaged 10.8 points and 8.5 points since supplanting Pau Gasol as the Lakers' starting power forward.