Dwight Howard Told By Lakers He Won't Be Traded 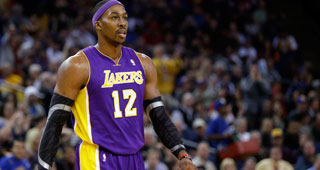 Dwight Howard has been privately told on repeated occasions by Mitch Kupchak that the Los Angeles Lakers will not trade him, according to sources.

The Lakers have not directly asked Howard if he plans to re-sign with the Lakers, but sources the Lakers are "very confident" that he will remain with the franchise on a new contract.

Sources say Howard truly does not know what he will decide in the summer, but that he will definitely not ask to be traded.

Howard can become an unrestricted free agent on July 1.